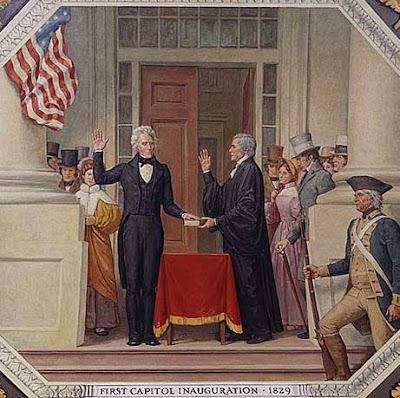 the only true historical inauguration
As a proclaimed conservative, it is no surprise that I was disappointed when Barack Obama won the election. However, as an American citizen and a supporter of our rules and regulations for voting and electing a new president, I have no choice but to support President Obama and pray for his success in office.
So, after that preface, WHY DO PEOPLE proclaim that the latest inauguration was so "historical"??!! What exactly was so 'historic' about it? Didn't we, the citizens of the United States, vote to put a well deserving, 'perfect for the job' man in the Oval Office? Didn't we base our opinions on his qualifications as President and not on the color of his skin? People may say that I am racist for not making a HUGE deal that we have just sworn in the first African-American man as president.
But, isn't making a big deal about it racist?
Who cares what the color of his skin is. I thought we were a 'color blind' nation- and for this reason a purple, yellow, white, black, polka-dot, striped, pink man is able to be President. I hope people voted for Obama because they felt that he was the better qualified candidate and not because they wanted to be apart of something 'historical'.
It is NOT the color of his skin but the MAN, himself, that makes the decisions that run our country.  Lets hope he makes the correct ones.
However, I didn't appreciate the reversal of the international abortion funds policy.  I just love how he thinks that hard working citizens of his country would be fine with funding abortions internationally. I, obviously, am NOT.
So much for keeping the money in the U.S. and stimulating the economy.
Posted by Alex Griffiths at 6:48 PM

I also had a hard time with the abortion thing, I think that is one thing I am going to start researching and seeing if I can make a bit of a difference in voicing and teaching others.

I couldn't have said this better myself..I agree a million percent. And ok this is going to sound bad but the thing that bothers me most is that he is half white raised by white people...so if this is about race (which it is) why is this soley a black victory? How come when people are half white and half something else the something else is always claimed? I don't know if this is making sense but hopefully you get what I'm saying.