Since July 4th landed on a Sunday, apparently here in Utah, they celebrate it the day before. A little weird, and a tad un-American... I'm not too sure how I feel about it.....BUT, we still had a great time celebrating it.

It may have been one of the busiest days so far, in the morning I had to go pick up a "Bountiful Basket". It's something new I decided to try in suggestion from a few of my friends. Boy, it was FANTASTIC! Two ladies started this food co-op and it has boomed in success. When you get fresh USA produce and vegetables at a fraction of the grocery store prices.. I guess success is expected. Here's some of the delicious goodies in the basket this week {they change it up every week}. 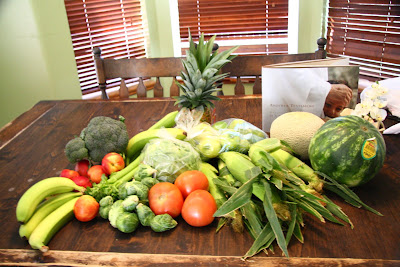 Pretty delicious! The best part: this was $15.  awesome.
After coming home and putting our goodies away, the babies and I set out to decorate our bikes for the neighborhood {ward} bike parade.
That proved to be easier said then done. With only one wheel done on both bikes, it was time to call it quits. {babies were going crazy!} Here's our final project: 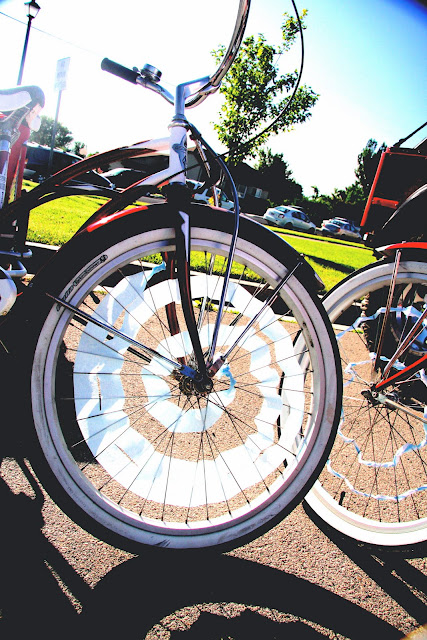 Then we had our ward picnic at the park. It was lots of fun. I'm a little bummed that we couldn't stay a little longer, but we had to go to the STADIUM OF FIRE!!! First things first.. here of some pictures from the picnic. 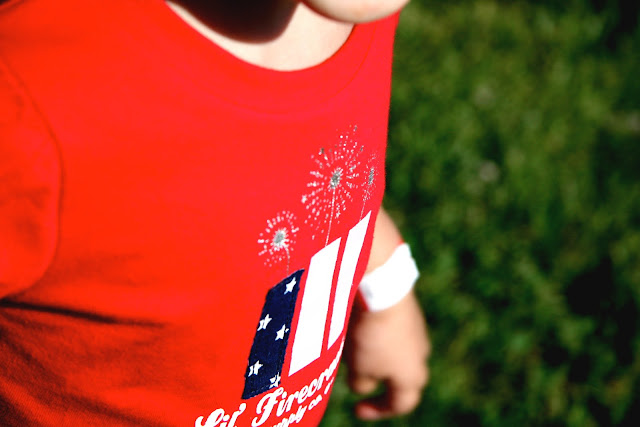 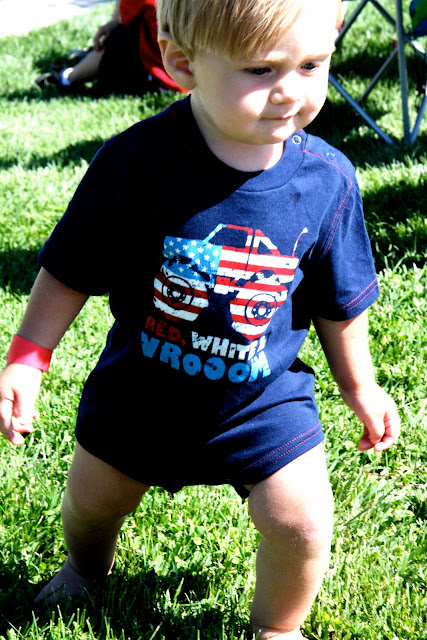 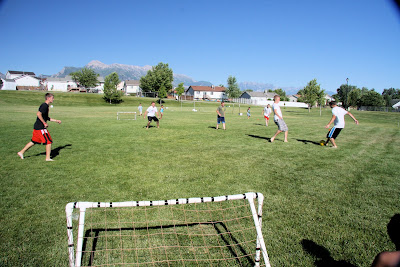 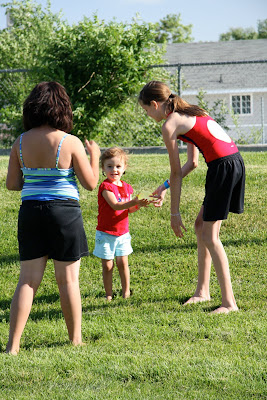 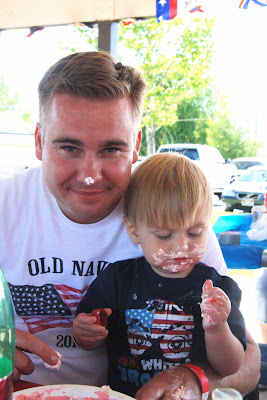 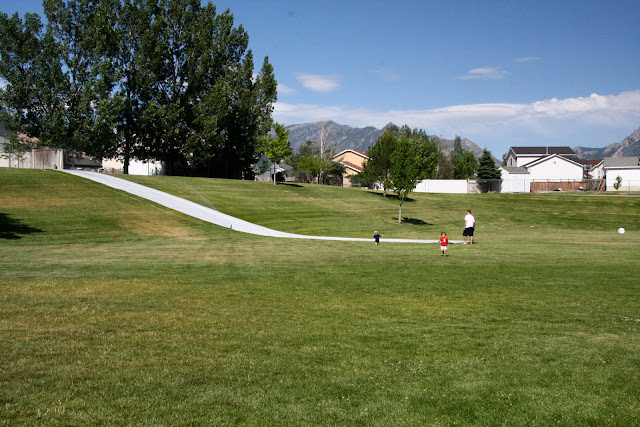 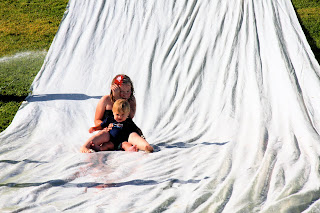 bobo and one of my activity day girls. 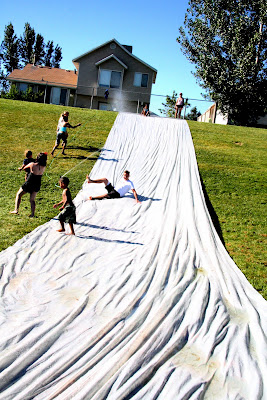 kurt falling on his bum

Well, that pretty much sums it up. I think next year we'll plan to stay for the whole thing. And maybe skip the stadium of fire. {depends who's headlining}
Speaking of which... THE STADIUM OF FIRE. {babies were with some good friends of ours.. they had their own firework celebration... Reese is talking NON STOP about it}
So.. first off, we rode the motorcycle to the SOF.. seriously, the best decision EVER!!! {traffic and parking was a ZOO} This is what we looked like: 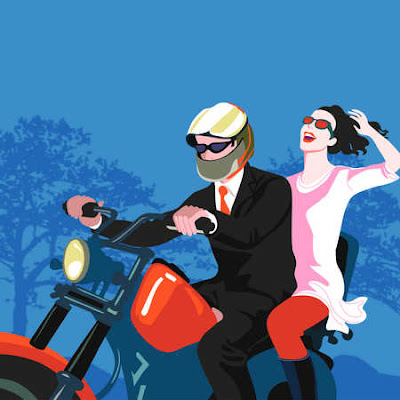 For my birthday my mom and kurt surprised me with tickets to see Carrie Underwood {at the SOF}. I was SO stoked.  I think she is a fantastic singer and songwriter. I didn't know, but the two of my favorite songs she sings, she wrote: Jesus, Take the Wheel, and Temporary Home. When she sang Temporary Home last night, she got a little choked up at the last verse.. I was about to LOSE IT!

she was SO AWESOME. AMAZING VOICE.

Oh.. and p.s. she waved to me during Before He Cheats song... you might be thinking. yeah right. but NO.. we were that close.. I saw her look at me and wave. AWESOME! 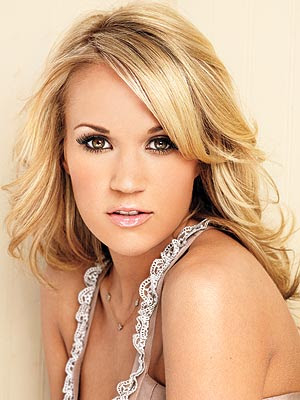 OH!! and when she was singing Jesus, Take the Wheel, she blended it  {and ended with} How Great Thou Art {the hymn}. IT WAS BREATH TAKING.
To get perspective to see how close we were.. Take 14 chairs and put one behind each other. We were in the 14th chair.. .... I am still in shock how close we were....
Now on to the other part....  the openers...
Lets just say.. it was.. interesting. 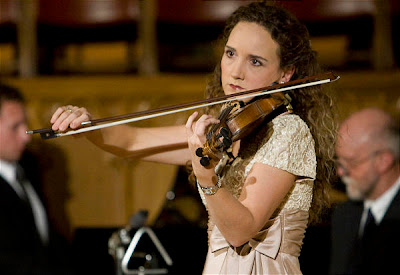 First up: Jenny Oaks Baker.. well.. in one word: AWESOME. a violinist, she played some classical western songs {I can't remember right now what it was.. but it was famous} 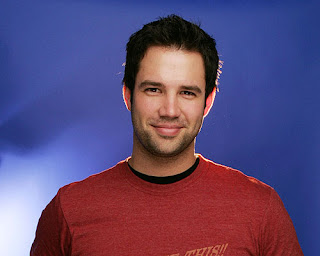 {the ringleader.. apparently his name is David Osmond}
Next:  The Osmonds... 2nd generation... well.... hmm... I thought *NSYNC broke up a long time ago..... seriously so cheesy. hmm.... BUT as we were leaving from the field at the end of the night, I almost ran right into the ring leader... i rubbed his back.. just so I can say I touched an Osmond {2nd Generation} 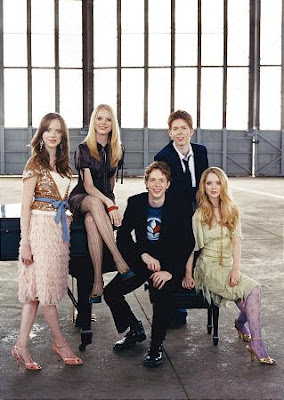 Then: The 5 Browns.. now, I can imagine that a family of Juilliard scholars that they would be AMAZING. Well... It wasn't..
They did a medley of STAR WARS music { sooo random for a 4th of July celebration}..
Then, one of the Brown's had huge sunglasses on.... {random}..
Then, one of the sisters had a crazed look on her face, a mix between a fish and Darth Vader.. THEN to top it off.. they all looked like they were having spasms.... as the guy behind us put it "THEY ARE HAVING A SHAKE OFF". ... which at this point his family, the family in front of us, Kurt and I, completely lost it and started to crack up.
When they showed "Fish Face" Kurt and the guy in front of us continued to crack up.. LOUDLY.. It was pretty funny.. I was having a really hard time not cracking up.. But I did.. c'mon.. it was HILARIOUS..
OK. so I mentioned they were doing a medley, right? They started off playing the Darth Vader song.. so they all had serious {fish} faces on.. then the next song was the Mos Eisley Cantina song {up beat, happy}.. and as soon as they hit the first note of that song they all plastered smiles on their faces... SOOOO FUNNY... oh man.. i'm cracking up just thinking about it.  Oooh dear...
Eric Dodge was supposed to perform.. but I don't remember seeing him??? who knows..
The fireworks were crazy HUGE.. but I just wanted to watch and sing to more Carrie. 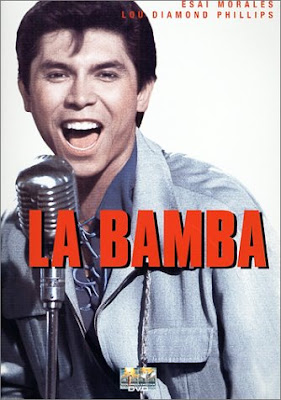 The Host: Lou Diamond Phillips.. AKA La Bamba {what kurt kept yelling every time he walked out}
SOOOOOO CHEESY. He has a good presence for a stadium celebration.... but he looked a little wired... and his laughs were a little forced.. which made our "comedy section" imitate and laugh about it....
Overall: Yesterday was SPECTACULAR!!! Thank you Kurt, Mom, Heather, and Eric for a great day!
{plus Kurt and I got some pretty sweet mugs out of it.... they glow.. they are pretty cool}
Posted by Alex Griffiths at 3:33 PM

I would love to see Carrie Underwood perform, but I would also love to see Jenny Oaks Baker perform. I didn't know she was going to be performing! Wow!

Glad you had fun. We would go every fourth after we got married, but then it got to hard with kids. We miss it a ton, but have fun watching from our home now.

That is awesome about the bountiful thingy..good way to get Americans to eat their greens & other produce :) I saw Carrie Underwood before in the past too..she is amazing and so so cute!

sounds like a crazy busy day of fun and games! bet you slept real well that night!

That post was hilarious, I felt like I was there! La Bamba!!Glad you had a great time.