When Nana and Papa came up, we told them that our big party we were planning was "off"- but Reese would like them to do something with her for her birthday.

So, Friday {black to be exact}, we decided to do something fun for her.

We planned to go to Boondocks, eat some lunch, and go see Puss In Boots. The movie, in which, Kurt and I were informed (by Reese) that Nana and Papa would take her to. 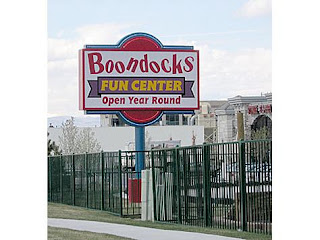 When we got to Boondocks, we all split up - tokens in hand - and played all those silly arcade games. About 5 minutes into playing, we walked by Nana  (Cindy) and tickets were pouring out of her machine. She said that she had won 200 tickets or so.. Never had I personally seen anyone win so many tickets.

Then about half our into our arcade extravaganza, Reesie and I walk by Daddy (Kurt) and he was doing a little victory dance because he had just won the Jackpot tickets on one of his games (around 275 tickets). Reesie and I were giggling at Kurt's happy dance..and once again, I had never seen anyone win so many tickets in one game.

Reese and I were getting down to our last 10 tokens or so, and at this point, I was just following Reese around giving her tokens when she found a game that she liked. We came up to this dinosaur game in which you smack a button to launch a ball into little holes with ticket quantities on them.

Reese said that it was a fun one and if she could have her tokens to play. I gave her the tokens and turned around to see if I could spot anybody else. About 2 seconds later I hear Reese squeal "I WON I WON!! MOMMY LOOK!! LOTS OF TICKETS"...

As I turn around I see tickets shooting out of her game, already about 50 on the floor.... I looked at the ticket countdown and it was at 455..454..453... Reese had just won 500 tickets. She was so excited..doing a happy dance like her daddy... then after the first minute or so, she started to get apprehensive and asked me if I could  please stop the tickets. I explained that it's a good thing that she's getting so many tickets because she gets to win a cool prize. After that she was very OK with all those tickets pouring out.

Of course, we found Daddy right of the bat to brag at Reese's HUGE winnings. Then she wanted to show everybody her huge stack of tickets. (and it was GIGANTIC).

So... the grand total of everybody's playing???

What a lucky birthday girl!

Thank you Nana & Papa for a fun day for Reesie  Pie. (and Bobo too!)
Posted by Alex Griffiths at 2:49 PM