Well, as you all know, we are expecting a "bouncing baby boy" (as Jacob from Twilight puts it- you just have to watch Breaking Dawn.. and try not to giggle throughout it...)

So here's the scoop on this pregnancy.. so far.

When Kurt and I first decided we wanted a third baby, we didn't want to have a huge gap from Everett to this last one. So, we either had our last little one soon or we just stick with two {wonderful} children. Really, not a big deal to either Kurt nor I.

So we went to Kurt's brother's wedding in July. I was feeling really great. I did get a little car sick on the ride up there because Kurt had me take one of those 5 hour energy drinks (those things are CRAZY by the way). But, other than that I was pretty good. (I mention the wedding because, little did I know, I was already pregnant at this point)

So we get back home and a couple of weeks go by, and then I realize that I was missing a certain 'monthly' thing. I couldn't really believe it.

I took a test.

Well, about two weeks out of our anniversary date, I started to get really sick. I told Kurt and I must have gotten a flu or something.. which couldn't really work past a couple of days.. so eventually, I was too sick, and so I told him. With a card.. I was trying to save.

With this card: (on the inside it said "for the third time") 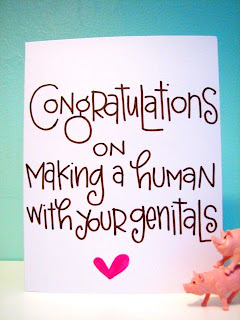 I was sick. SICK.

This early pregnancy reminded me so much of when I was pregnant with Reese. Everything was exactly the same. Craving the same foods, avoiding the same smells. Needless to say, I was convinced I was having a girl. AGAIN.

Which was fine with us. When we were first discussing our preference, Kurt and I both said that it would be nice to have another girl. Reese is just so darn fun, and Everett is so manly that it would be a nice balance.

Anyway, with this pregnancy I was/am very nervous about the health. I think it's because that I was really so fortunate with Reese and Everett, that I feel like I'm pushing my luck having a third baby. So I decided that I really didn't want to tell anyone until all the important test results had been taken. Which, is how we were with all the kids really. I mean (not to make anybody nervous) but so many things can go wrong in the first trimester that I would hate to let all my friends and family know we are pregnant the day I pee on a stick, and then something goes wrong, I don't know.. I would just like to deal with that kind of thing on my own. .. and that is why we waited "so long" to tell everybody.

Well, Kurt let it slip to pretty much everybody he ran into. Even our friends he saw at Walmart. He just couldn't resist. So after the initial test and ultrasounds were fine, we told our parents.

Then when the down-syndrome test, and the big ultrasound was ok, we would let everybody else know.

At around 20 weeks or so, when we found out we were actually having a BOY. The 'boy' side of the pregnancy started to kick in.  With Reese I didn't sweat (even though I was pregnant during summer) and felt energetic. With Everett I was so stinky (sorry but it's true) just like a boy. I felt like testosterone was pumping through me and I just couldn't get back to being girly. But, my hair was nice, and my skin did clear up.

So, yes, I feel gross pretty much all the time. I purchased the heavy duty prescription deodorant, and even in the middle of winter I'm sweating non-stop. GROSS. I am so exhausted! And can't get in 50 yards of anything GARLIC. oh dear that is the WORST SMELL EVER.

Leading up to the 20 week ultrasound (the exciting one), I had a very strong feeling that I was having a boy. I just felt it in my gut that we just needed to have another boy. Maybe it was because Reese dresses Everett up in her princess dresses, or maybe it was mother's intuition. Who KNOWS!?

When we found out we were having a boy, Reese was TERRIBLY upset. Mainly due to the fact that Kurt and her would have a daily conversation about having a baby sister. I warned him not to do that, just in case.. but when does a husband ever really listen?

When we got home Reese and Daddy had a 'private talk' and Reese was fine with another baby brother. Not sure what was said. Kurt said it's between him and Reese.. and hey, if Reese is in a better mood, I'm OK.

Kurt and I are both thrilled that it was actually a boy. Kurt gets to spoil his little girl, and I get to take these rough boys to sports. It actually works our perfectly. And Everett? He's already giving his brother raspberries and poking him. (not too much fun for mommy, but Everett loves it).

And yes. we are done with babies.

Now, every time I've said that, people have laughed and said "yeah, right." Well, I guess no one really knows Kurt and I because, YES. This is our last one. Three kids is PERFECT for us. There really is no way we could handle a fourth child. NO WAY.

So there's the scoop. poop.

I feel so tired all day long. My right hip feels like it's out of socket. I have a perpetual sinus problem (I have no idea where that came from, but my doctor said some women just get it....).  And sleeping is starting to get uncomfortable.

my skin is clearer (some days), and my hair is getting a little thicker??

pregnancy just isn't my thing. But boy, do I LOVE my babies. I am so excited to meet this one.

Still don't have name.. or any secret name... or any name that I might like... it's hard with these boys. Taking suggestions...

So congrats.. you made it to the end of this post. Your prize??

Here's our ultrasound video... if you can catch it, you can tell it's a boy straight away. And I did catch it.. straight away.. so when he announced it, I wasn't surprised.

(sorry about the watermark... it's the best i could do....converting the video for free...)

The video of babycakes is so amazing and wonderful!! I love every little bone in his body already!

Little cutie! What a blessing! He is so darn cute! I almost teared up watching your precious little baby boy. :) Can't wait to meet him! He looks like he has Everett's big feet. :)

Alex! Hello! Just ran into your blog and couldn't resist reading about your scoop on your pregnancy. I have to laugh, just a little, because I have my left hip feeling outta socket AND the sinus problem, which I have never had. Weird. Must be in our water... Anyway, I am SO impressed you and Kurt still put on an amazing ward dinner dispite feeling "pregnant!" And garlic... Ewwwwwwww.