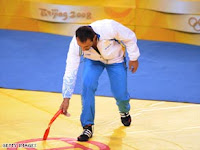 Swedish wrestler Ara Abrahamian threw away the bronze medal he won in the Greco-Roman category in disgust in a protest over judging in his semifinal bout.

Can you believe the Swedish wrestler that threw down his medal???!!! How completely disrespectful and ungrateful can somebody be? Not only has he completely made a fool of himself and his representative country, he has disrespected all the other Olympic athletes competing for a bronze medal, or any medal for that matter.

People like this completely disgust me. It seems like nothing is ever good enough for them. They want it all or nothing. Arrg.

Every time I see the Today Show interview Ryan Lochte, they congratulate him on his success in the Olympics, then ask him about Michael Phelps. He reacts more than graciously and answers the question. GIVE THIS BOY A BREAK! He is an amazing athlete and has proven himself by winning gold to the favorite Peirsol in the 200m backstroke and sets a new world record! His two bronze medals have been a result from racing against teammate Phelps, but he still says that having the bronze medal is amazing.

I hope they start interviewing him and quit asking him about Michael Phelps.
Posted by Alex Griffiths at 11:36 AM

I hate how they ask EVERYONE about Phelps. It's seriously an overkill. I'd be so annoyed if during my interview they kept asking me about someone else.

Ryan Lochte is an Adonis.
He has a great reputation among his fellow swimmers. He is obviously very secure with his abilities in order to constantly field the Phelps comparisons... and with such grace.
The true Olympian is
DARA "You-can't-put-an-age-limit-on-your-dreams" TORRES!!