Where have all the Griffiths gone?

First things first. I just registered Reese in Kindergarten. I can barely believe that I have three children, let alone one that is old enough for school. Where has the time gone?! I have no idea. Devin is almost 1, Everett is starting preschool.. I mean can we just take a little pause for a second! C'mon!

So, we are going to LIVE IT UP this spring and summer before I have to stick to school holidays. That means CALIFORNIA. I miss my home.

Kurt's update... he's working... and playing on his new iPhone.... haven't seen his face in months.

As for mental craziness, I think we are developing Cabin Fever. "I've got the MADNESS" (The clip is from a HILARIOUS movie, Muppet Treasure Island... oh those muppets...)

This has been the coldest, wettest, most miserable winter EVER. Luckily we seem to have escaped the dreaded flu. (No flu shot this year.. coincidence? I think NOT!) But, the kids do not want to go outside, drive anywhere, or do anything. They just want to hang out at home. "It's driving me INSANE"

Thankfully Kurt found a hot spring that we braved in the snow with the whole family. It was so nice and warm, and it felt GREAT to get into some nice warm water. (The Lehi Legacy Center Pool was FREEZING)


This is Kurt doing his "Polar Bear Plunge". The kids find him very entertaining, that's why we keep him around.

Physically, I have wonderfully managed to get back to my pre-baby weight and then some. I have to say, it sucks that Kurt can cut out Coke and drop 20 pounds easy while I work out 3x's a week, low carb, low fat, blah blah... to get the same result.. ..... Men... smh (shake my head)

It has been nice to be more physically active, I really miss good ole' Rancho and field hockey...and track.. those were fun days.

Speaking of physical craziness, DEVIN  is walking... nay RUNNING now. How old is he? oh.. 10 months. He already eats us out of house and home. He LOVES food. I asked the doctor if it's OK to feed him so much, and he told me, if he wants it, and eats it, it's fine. .... REALLY? Don't get me wrong, we are sticking mainly to the recommended baby food, but once and a while we'll give him some of our dinner, or the kid's lunch, and he LOVES IT! I don't want to screw up his digestive system by giving him foods he's not ready for, but so far, it has been good. I'm excited to get my boobs back. (TMI? oh well)

Everett is still my stunt double. I am SHOCKED he hasn't broken a bone yet. I swear he is going to be our athlete. He already has muscle everywhere, I can barely believe him. He is amazing, and strong.

Reese is still our skinny mini.

CREATIVELY.... (squeal!) I was coming on my blog today to do a little update when I noticed in my stats that a lot of 'hits' had been coming from disneybaby.com. I was thinking I may have posted my personal blog on there somewhere, but when I clicked the link I found this: 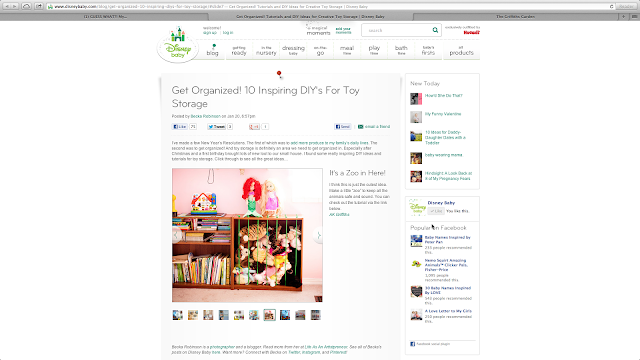 I was STOKED! I don't get paid or anything like that... BUT I just LOVED that my tutorial was on a Disney website. I think I love DISNEY even more... I didn't think that was possible. ...

Anyway, if you want to check it out, here's the link: http://www.disneybaby.com/blog/get-organized-10-inspiring-diys-for-toy-storage/#slide7

how cool is that?! Anyway, So that's what is going on with us. When we actually do something breathtaking or