My little boy is getting to be so big, SO QUICKLY!!  i can't believe that in only a few months he'll be a 1 year old!!!

He has been having a very rough week.. SIX.. yes SIX (6) teeth are coming in. The doctor told me to go get some baby tylenol after he saw the little 'buds' at his 9 mo. checkup. Boy he wasn't kidding!! poor thing... he has gotten a runny nose and a little fever all from his teeth! The doctor said by next appointment he should have a toothy grin!!! WHAT?!! i know.. crazy.

He's been eating big boy foods and LOVES it!! he is always diving for our food.. and when he is successful, he sits very contently, as he nibbles on his victory and grunts in delight. it is HILARIOUS!!! 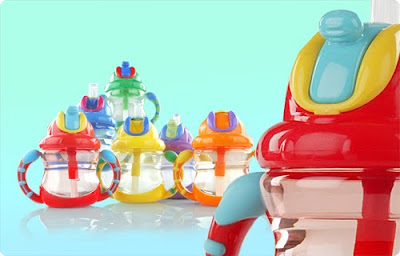 He is also past the bottle already (he never really was that into it - or maybe i'm just not that into them) and is on to his flip straw sippy cup!!! (another thing he loves to use!)

I really think it's from watching Reese use her straws in her cups, that he is catching on SO quickly!! I am amazed on how much he can do (and how much he THINKS he can do). He is now trying to stand up and walk around.. before i know it he'll be running..chasing his sister...

I remember when adelyn learned how to drink out of the straw after she watched reese do it! I can't believe everett is already almost one! It goes by tooooooooo fast.

He is such a cutie pie!